DAY 37: was all about seeing the sights of Thimpu.

We spent the day seeing what the Bhutanese capital has to offer, oh, and almost seeing the Elvis/Fonz impersonator King when his motorcade drove past. Blacked out windows, though…

Bhutan didn’t have roads until the 1960s, only has 2.5km of dual carriageway, and does not have a single set of traffic lights (apart from a short-lived experiment, which confused all and sundry). Instead, the major traffic junctions in the capital have “dancing” Policemen in Jacko gloves! 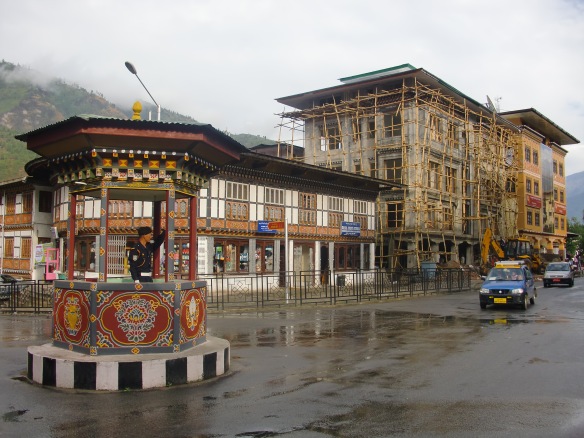 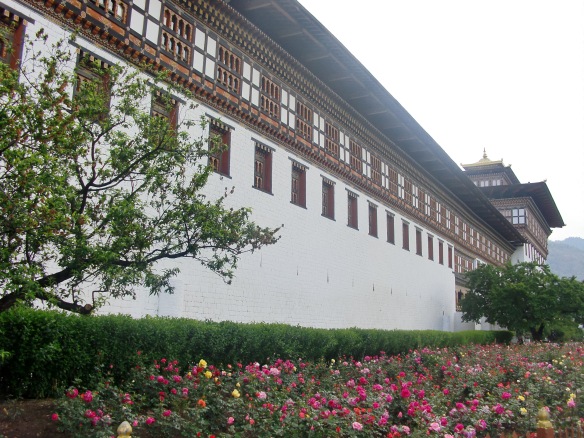 The largest book in the world, 2.13 metres wide, is in the National Library. I had to ask Abhi, our Nepalese tour leader (who’s about 5 foot 10) to pose next to it to get a true sense of scale. 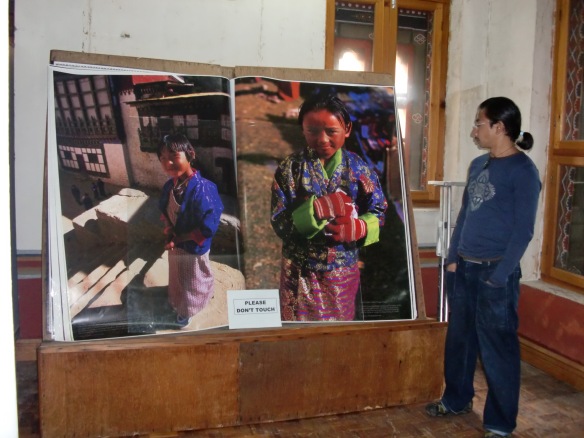 Allegedly the biggest book in the world, Bhutan

They also have Steve McManaman, circa I think World Cup France 98, on stamps. I have no idea why! 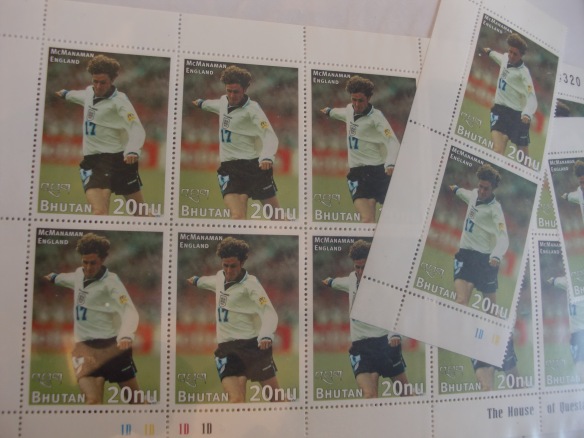 DAY 38: was mainly filled with a hike up to the Tiger’s Nest Monastery, which clings to the side of a rocky hill. 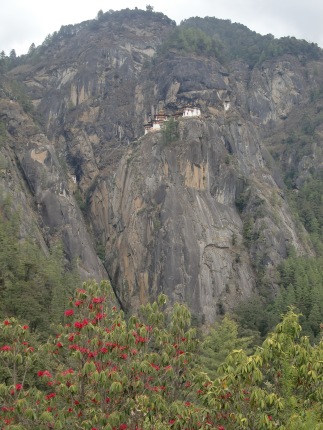 It was a very steep climb to the top, about 3,200m above sea level, but the views both of the monastery and the Paro valley floor are worth it. 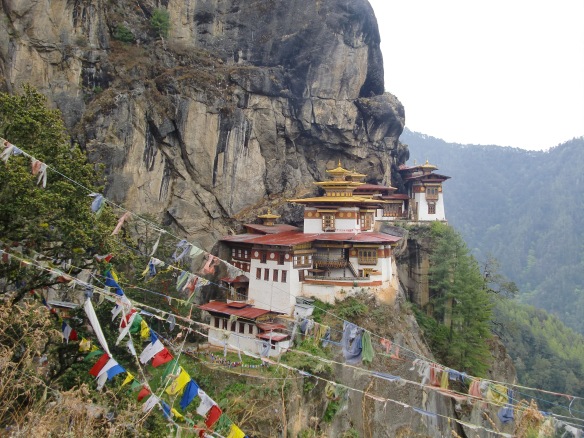 In the morning, I fly to Delhi.

Okay, so today is the day of the General Election back home, and I’m actually (for the first time) feeling a bit homesick. Not because I’m missing anybody or anything, purely because the political situation seems interesting enough that I would like to observe.

Anyways…since the last post I’ve been having a wander through the lovely, beautiful and happy place that is Bhutan (and there aren’t an awful lot of internet connections, so I’ve not been able to tell you about it on my way).

We left Paro (the airport town) to drive through Thimpu (the capital), and then onwards to Punakha, the former capital city.

After lunch, and checking into our hotel, we visited a couple of monasteries and the spectacular c17th fortrees (Dzong) in Punakha, which looked beautiful amongst the Jacaranda trees along the river.

Many houses and businesses in the Punakha valley feature phallic symbols painted on the walls, as a fertility ritual. 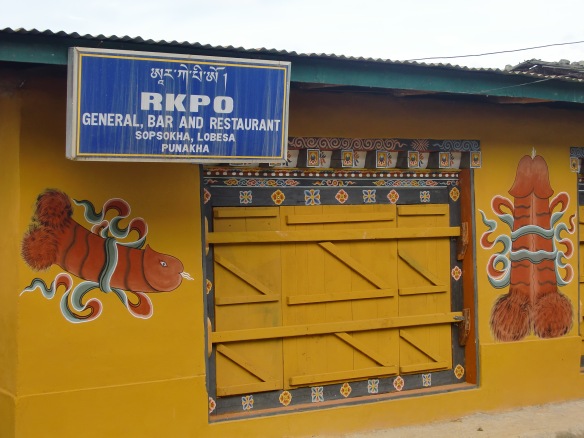 This was started “The Divine Madman” (well, a self-styled reincarnation of the c.15th Bhutanese legend)  (I found a book on the legend in Thimpu, now in my rucksack).

I’ve also met “The Divine Madman” (well, a self-styled reincarnation of the c.15th Bhutanese legend) in our host “Uncle” at Hotel YT in Punakha. It was obviously easier for me to get a job behind the bar…. 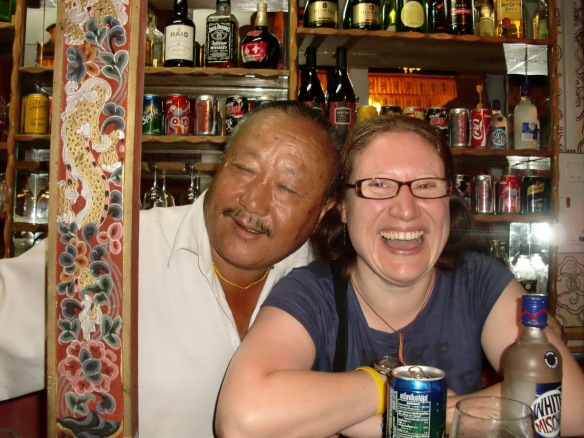 Note the spirit called ‘White Mischief’ (front right). It sure was…also, it was one of our travel group’s Birthday, so “dinner” took more of a cake-and-alcohol turn: 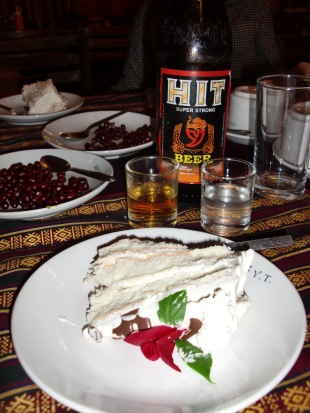 The next day, we (groggily!) hiked up to Khasum Yulley Namgyal Chorten high on a hill beyond Punakha. And some of us (well, me) hiked up even further to the Queen Mother of Bhutan’s Summer House. Absolutely zero security, too. It’s the happy place, remember… 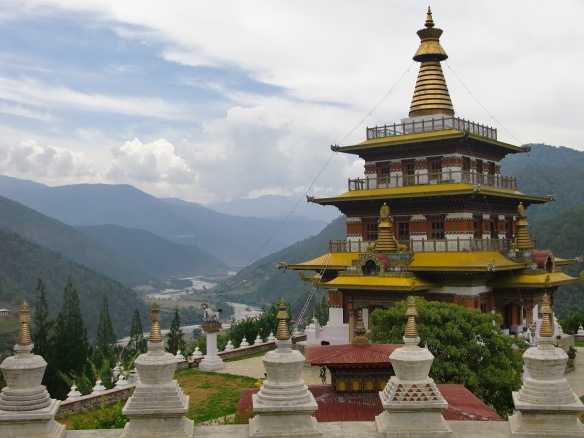 We also had a potentially ill-advised go at the national sport of Archery (suprisingly, no-one got killed!) and a beautiful riverside picnic, then visited Punakha Dzong properly. I made some sound recordings of the ceremonial brass horns inside the main temple, but sharing them with you would involve me working out how to upload them. Another day…

The day started with the short drive to Wangdue Phodrang, and a visit to the monastery. It’s amazing how young children are sent to monastery school, and mostly because their parents can’t afford to feed and clothe them. This lad was only just six, and I just wanted to scoop him up and give him a massive hug; 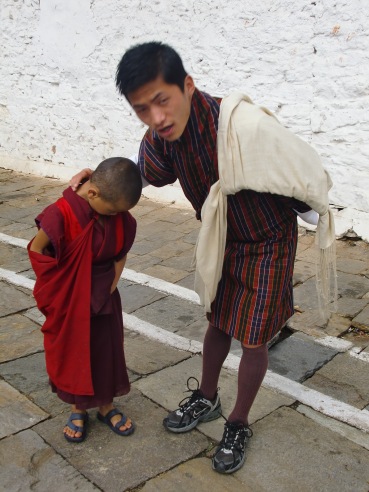 Wangdue Phodrang town itself is perched on a hilltop, almost above the clouds. The sights and vibrant colours of the market were stunning: 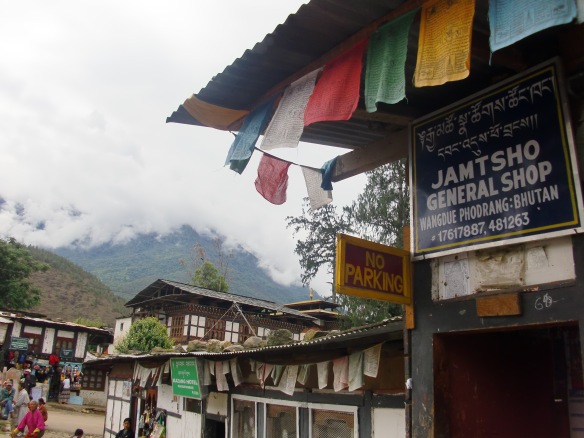 Driving onwards to Gangtey (via a tea-stop amusingly called ‘Nob-ding’!), we had chance encounter with the recently (2 weeks ago, and on a tour around Bhutan) deceased body of the latest re-incarnation of Guru Rinpoche and his funeral cortege and celebrations. 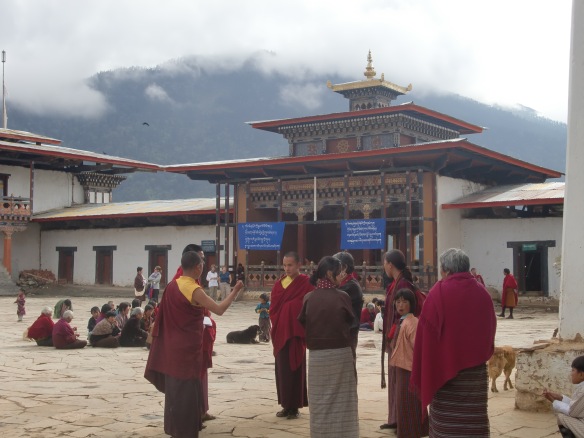 Monks and mourners outside the memorial service, Gangtey, Bhutan

The evening was spent at a homestay in the Gangtey Valley, where I was lucky enough to sleep in the family’s prayer room. Really quite something, and clearly not going to happen again in a hurry. These experiences are why I love to travel.

Now we’re back west, in the capital city of Thimpu. We’re halfway through our 2 days here to see the capital and it’s Dzong, parliament, markets…more to come tomorrow.

One of my favourite photos from the market was this kid happily playing with cardboard, whilst his mother sold vegetables: 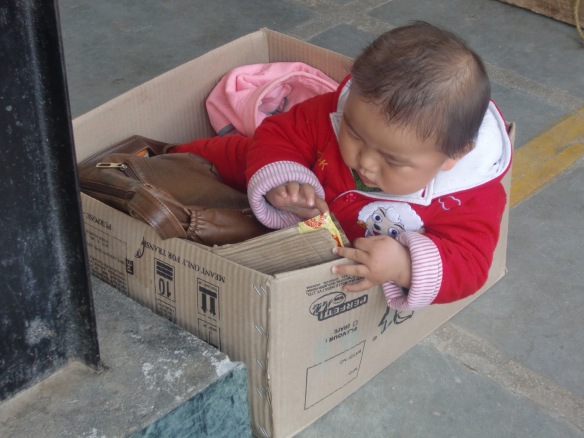 Earlier I had time to buy some of the lovely Bhutanese national dress as a souvenir: 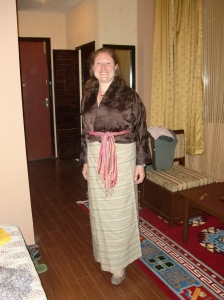 Okay the half-kira isn’t tied too well, but you should get the gist (and a laugh)…!

Two and a bit days before I leave Bhutan, a week before I’m back in London. This isn’t right, right…?!

And, as a closing gambit, I have mostly been listening to Elbow’s ‘The Seldom-Seen Kid’ (particularly ‘One Day Like This’) and Frank Turner’s ‘Love, Ire And Song’. So many times that I suspect that those albums will always be synonymous with this trip. This is not a bad thing.

Hello from the Paro Valley, Bhutan.

This morning was a bit of a hairy – and very early – ride to the airport in Kathmandu, trying to avoid the Nepalese general stikes and the Maoist protesters.
This is what I got stuck in: http://news.bbc.co.uk/2/hi/south_asia/8656894.stm
Our VERY clearly marked ‘tourist bus’ had to sneak through a couple of roadblocks, but luckily it was early and everyone was still in enough good humour to let us through. Will be very interesting to see how that one progresses…

The Maoist party situation also meant that yesterday in Kathmandu was pretty much lost. aka no Monkey Temple or Durbar Square visit, just remaining pretty close to the hotel in Thamel district. still, for the last night of a month-long tour, it was good to have a final group meal, and say – very sadly – goodbye to my new friends. I really was lucky there, both with the near-perfect content of the tour, and the lovely people I was on the tour with. Love you all, guys, if you’re reading this.

The 40-minute flight to Paro wasn’t as full of Himalayan views as expected, due to the clouds, but the descent into Paro amongst the winding hills was spectacular. and also made me very much miss mountain biking.
We spent the afternoon visiting the Paro fortress, and spectating at a local archery tournament. 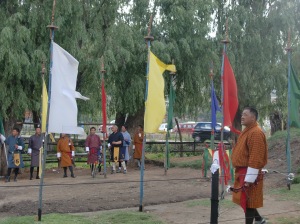 Listen up… it’s the national sport of Bhutan, and the best guys are amazing at it. They have full-on crossbows, and regularly hit a target bang on from 150 metres away.

So far the land of the Thunder dragon is lovely, beautiful and peaceful, and I hope the rest of this week will be as spectacular as the last 5 have been. Off to put on more Deet spray – cos I got bitten to hell in Nepal – and sit out looking at the stars. Goodnight x